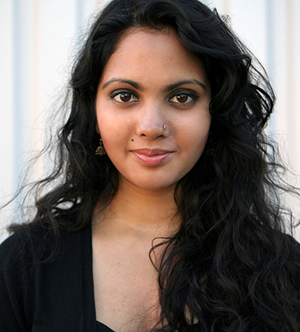 Mira Kandathil lives in Bern and is a theatre professional. She studied theatre (BA and MA) at the Bern University of the Arts (HKB). In the year 2010 she realised her first own public project «Mira Bhai – A South Indian classical Danceperformance» at several independent theatres in Cologne. She announced a dance and broke the expectations with a surreal monologue of ninety minutes. Already in her first project she focused on questioning conventions and played with the expectations of the audience and with the extrem blurring between the bounderies of reality and fiction. In 2012 she played several leading roles in the production „Der große Marsch (The Great March) at the Stadttheater Basel which was invited to the Heidelberger Stückemarkt. In July 2015 she gave her debut as a movie actress at the German speaking movie “Marry me!“ (a co-production between “Das kleine Fernsehspiel (ZDF)“ and ARTE).

In 2014 she won the first prize of the Swiss competition „Premio“ together with Annina Machaz. With their first joint stage project „Follow us“, they toured succesfully through Switzerland. They took place for instance at the Les Urbaines Festival Lausanne, at the Gessnerallee Zürich, Schlachthaustheater Bern, Theaterspektakel Zürich, DC5 Festival at Theatre Du Loup in Geneve and others. The project deals i.a. with the embodiment of two art figures, who are based on the model of Marilyn Monroe and Amy Winehouse. Their upcoming joint project is going to be premiered in spring 2018 at the Gessnerallee Zürich. The Duo Kandathil/Machaz was nominated along with six other artists for the Swiss Performance Prize, which will take place in October 2017. Beyond that Mira Kandathil is working as a dramatic advisor / Character development Coach for theatre productions.

From September 2016 to July 2017 she completed the Master in Research on the arts at the University of Bern in the Department of Social Anthropology. In her master’s thesis at the University of Bern she focused on the art figure as a research tool. With her first master’s thesis at the HKB (mentor: Johannes Kram) „Die Kunstfigur als performativ ästhetisches Gesamtkunstwerk und was mich mit Harald Glööckler verbindet (Art figure as performative-aesthetic synthesis of the arts and what unites me with Harald Glööckler), she has been invited to the „Campusfestival der Schweizer Theaterhochschulen“. With her self-developed and self-embodied art figure „Maria Marshal“ she works as an expert for art figures.

She publishes the results of her artistic-scientific research in form of Lecture Performances presented by her art figure Maria Marshal at scientific and artistic platforms (e.g. AUA Wirleben Theaterfestival 2017, Volkshochschule Zürich, Gessnerallee). Maria Marshal was the first face of the international ‚Keine Disziplin Festival’ (2017) at the Gessnerallee in Zürich. In September 2016 she gave together with Priska Gisler the lecture „Die Kunstfigur als interferierendes Identitätskonstrukt zwischen Kunst und Wissenschaft (mit Dialog, ohne Schnittstelle)“ (“Art figure as interfering construct of identy between art and science (with dialogue without interface)“) at the international conference  "Wissenskulturenim Dialog“ (“Knowledge cultures in dialogue – interferences“). Together with Priska Gisler she wrote a scientific article for the event-volume of the conference.

Mira Kandathil worked artistic and scientific till September 2017 at the „Research Focus Intermediality“ Department at the HKB on a research project about art figures.

The purpose of this dissertation project is a first time comprehensive study in view of the phenomenon of „Artistic Figures“ in regards to its simultaneity both as a research tool and autonomous artistic means of expression. The potential of art figures to explore, embody and present socially relevant content will be analysed. Reflecting the ethnographic method of participatory observation the method of “wallraffing“ and - based on art figures - the performative - ethnographic methodology of performing observation will be developed. For realizing the dissertation project qualitative interviews will be conducted with artists, who work themselves with art figures. By the comparative analysis of the interviews artistic mechanisms will be identified, which are relevant for the use of art figures as a research tool. To develop the methodology of performing observation, performative-practical experiments take place, in which the realisation of ethnographical methods by own  art figures are made, carried out and evaluated. Within the project it is referred to the approach of “embodied knowledge“by Julian Klein.