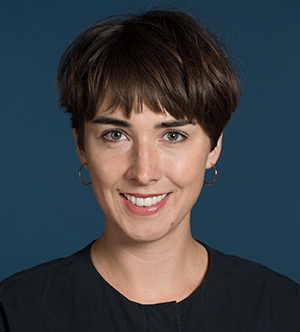 Jana Thierfelder (*1987) studied visual communication at Merz Academy in Stuttgart. In 2015 she completed her Master in Transdisciplinarity in the Arts at the Zurich University of the Arts and in 2017 in Social Anthropology at the University of Bern. Besides various internships during her studies, she worked as a communication designer until 2013 and has since been involved in freelance projects. Since 2015 she has been employed at the Zurich University of the Arts as an assistant at the Master of Transdisciplinarity and since 2016 she has been a member of the Zeichenwerkstatt led by Prof. Dr. Sigrid Adorf at the Institute for Cultural Studies in the Arts.

In October 2017 Jana Thierfelder started her supervised by with Prof. Dr. Michaela Schäuble and Prof. Dr. Priska Gisler. The dissertation project Challenging interfaces. The epistemic role of design in evolutionary biological knowledge production uses ethnographic methods to investigate the role of visual design processes in the scientific knowledge process at the interfaces of design research and science and technology studies.

The dissertation project takes the observation that design plays an essential role in the acquisition of knowledge in the natural sciences as a starting point. During the research process design is employed in various forms from collecting the data in the field to publishing the results. A case study from evolutionary biology is used to investigate how and which cognitive and epistemic aspects of design influence the scientific knowledge construction. The project refers to studies of science and technology studies, design research and social anthropology and focuses on concepts such as skilled visions, embodied knowledge and visual thinking within the framework of ethnographic methods and visual analyses.