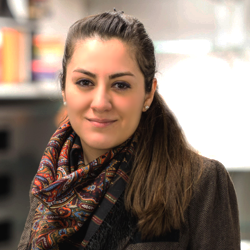 Mahroo Movahedi is a visual artist and Researcher born in Isfahan, Iran (1985). She received her BA and MFA from Iran and she has received her Master in Transdisciplinary arts at (ZHDK)Art university of Zürich in Switzerland. Due to her move to Switzerland she has entered into the interdisciplinary arts areas that has opened a new chapter in her artworks.Mahroo Movahedi explores themes of culture, landscape and language questioning the notion of identity and sense of belonging. Her work is usually interdisciplinary and international, connecting anthropological and sensory ethnography as well as art practice.She uses painting, printmaking and photography as her medium for her artworks With an outstanding eye for color and texture, she employs these two elements as the most notable factors in her artworks.Her ideas comes from her imagination and intuition. She is always fascinated by blending traditional and modern. Another part of her work focused on collage techniques and make it possible for her to go into the mixed-media. The audio-visual elements of her work shift in the shapes of documentary-experimental style. Mahroo Movahedi engages with the representation(s) of self and other through the lens of her experience of living in and between different spaces, cultures and languages.
Mahroo Movahedi is the winner of Young art Award 2016 at Ute Barth Gallery in Zurich and she participated and exhibited in several solo and group exhibitions during her profession in Iran and Switzerland.Currently, she is one of the Art project leaders in Sciene Xplore in Zurich and Porteguel.  From February 2017 to December 2017 she completed the Master in Research on the arts at the University of Bern in the Department of Social Anthropology.
For more Information see: www.Mahroo-Movahedi.kleio.com

Sensory Ethnography of the "Zayanderood" river in Isfahan, Iran

A sensory ethnographical study is made which is based on people's senses, experiences and memories of the Zayanderood, or "Live River" in the city of Isfahan in Iran. Participants are interviewed in a real-time dialog in virtual space, and they explain how they sense the environment, specifically the riversides and riverbed and the famous old bridges. The important aspects that are analysed include the sensory stimulation of memories via sight, sound and smell, the reporting of the sensual experiences, and the resulting thoughts and imaginations of the participants about past and present places, activities and feelings.
The location of the river was chosen not only for its historical significance, but especially because now the water often dries up, giving a new face to the cityscape and resulting changes in recreational usage. The study was designed to elicit participants' responses to these changes (such as the presence and absence of water). lt also could evaluate the relative importance of different senses as they are involved both as stimuli and in responses. The imagination and emotions of participants as observed during the interviews are encoded in the documentation of the study.
The study has relevance to anyone who needs to reconcile two worlds (such as past and present, there and here, presence and absence, for example the disorientation of emigrants). lt is also relevant to human adaption to changes, and to the integration of sensory stimuli in memory.